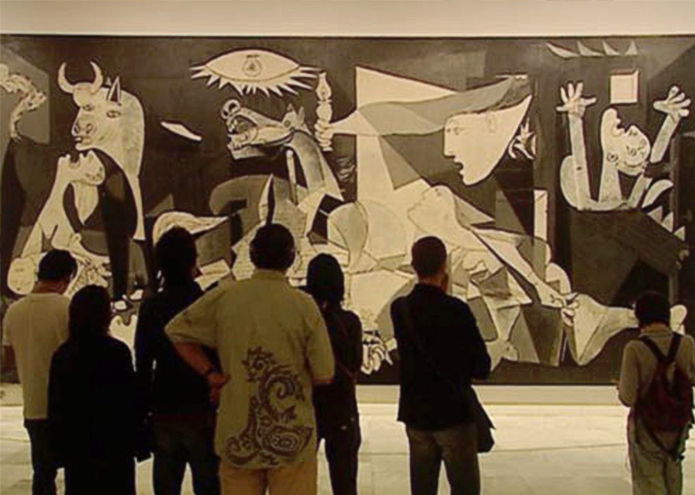 THE GUERNICA STORY
The name of Guernica – a small town in the Basque country of northern Spain – holds a special notoriety in the history of warfare. On April 26 1937 the town was bombed into oblivion during

Spain’s bloody Civil War. In time Guernica would have iconic status as a result of Picasso’s
painting of the same name presented in the Spanish pavilion of the Universal Exhibition of Paris of 1937. Along with places such as Hiroshima and Nagasaki, Guernica is one of the most potent symbols of the horrors of modern warfare.

Yet, from the outset, the story of Guernica was clouded by propaganda, myth, counter-myth and blatant lies and for nearly forty years the destruction of Guernica by bombers was denied by Franco’s Spanish Government. Until 2005 there was no known film archive showing the actual destruction of Guernica. Detailed research over the last five years has also revealed new testimonies and uncovered classified documents which put the story into its international context.

This film brings together unique film archive, eye witness accounts, dramatic reconstruction and CGI together with expert military analysis to tell the definitive story of what actually happened at Guernica and the political aftermath of one of the defining events of the last century.

In 1936 Civil War broke out in Spain. The Insurgents, led by General Franco and supported by Hitler and Mussolini quickly gained the upper hand over the Republican forces. The Spanish Republican Government appealed for support from the international community. The Soviet Union, Czechoslovakia and Mexico offered limited assistance but Britain and France’s reaction was to broker the Non-Intervention Treaty where officially there would be no assistance to either side in the conflict.

The Basque country in the north of Spain had remained loyal to the Republican Government and was encircled by Franco’s advancing troops. Despite the Non-Intervention Treaty Franco’s forces had the military assistance of Germany and Italy which included Germany’s state of the art Condor Aviation Legion. The Condor Legion had been created by Germany’s Luftwaffe under Marshall Goering with the aim of developing new tactics in aerial warfare. The years since the First World War had seen major advances in aeronautical technology: Spain was to be the ideal testing ground for the tactics of war from the air.

April 26 1937 was market day in the town of Guernica – the symbolic capital of the Basque country and home of the tree of Guernica – the revered symbol of the Basque people. At 4.30 in the afternoon the first planes were spotted heading towards the town. A few minutes later they unleashed their bombs. Over the course of the next three hours wave upon wave of planes bombed Guernica. Over 30,000 kg of bombs were dropped on the town. The terrified civilians who fled were machine-gunned as they ran. The planes then returned with incendiary bombs to burn Guernica to the ground. From a scene of almost complete destruction there was perhaps one sign of hope – the sacred tree of Guernica remained un-scathed.

But this was a definitive historical moment: Guernica was distant from the front line – it was not a military target. For the first time it was civilians that were in the firing line. And there was a systematic element to the campaign with the first wave of bombs opening up the buildings for the incendiary bombs to do their work. This was the first chapter in a new type of warfare that was soon to terrorize the rest of the world.

By chance, a young British journalist, George Steer, was nearby in Bilbao at the time of the bombing. That same evening he drove out to Guernica. The next day he dispatched his story to The Times and the New York Times. His article sent shock-waves around the world. A military success now had the makings of a diplomatic catastrophe for the Franco forces. In a desperate attempt to counter the story, Franco’s Press Office claimed that it was the retreating Republican forces that had fire-bombed the town. Over the following weeks there was an extraordinary propaganda battle with the British Government secretly fully aware of the facts yet unwilling to admit what had happened in order not to undermine its farcical stance on Non-Intervention.

Three days after the bombing of Guernica, the town fell in to Nationalist hands. They now had the upper hand in manipulating the evidence in Guernica and did everything they could to blame the destruction of the town on ‘Red’ and ‘Basque Separatist’ forces. Within two months Franco’s forces had won the war in the Basque country. This made it easier still to disguise the truth of what had happened at Guernica. With the eventual victory of Franco in the Civil War in 1939 the door would be closed on any discussion about Guernica within Spain until Franco’s death in 1975. But even in the year’s after Franco’s death the fledgling democracy was unwilling to confront the past.

It is really only in the last decade that the events of Guernica have been systematically examined within Spain. Outside of Spain the consequences of Non-Intervention have also been uncomfortable. The legacy of what had happened in Guernica and in Spain as a whole would soon cast its shadow over the rest of the world during the Second World War.

The Guernica Story tells the definitive story of Guernica using film archive, personal testimony, reconstruction and computer graphics as well as expert analysis. Part of the narrative is provided by the stories of key individuals who were intimately involved in the story, mainly the children who survived the bombing and George Steer – the British Journalist who was responsible for exposing the horrors of Guernica to the world, We also hear the story from the viewpoint of a German and Italian pilot who were involved in the operation.

Much of the drama of the actual bombing is brought to life by extensive reconstructions and CGI. Filming with one of the actual planes that were used in the attack – the Fiat-32, Dornier-17, Savoy Marchetti-79, Heinkel-111, Messerschmitt- BF109 and Junker-52, we also look at the advances in technology that made the nightmare of Guernica a reality.
A unique archive film has come to light in the past year. The film was shot in Guernica on the day of the bombing and then sent to France for safety. With the fall of the Basque country in to Franco’s hands the film remained in France until the start of the Second World War. With the events of Guernica still being denied by Franco and Hitler the film was confiscated by the Germans and taken to Berlin. At the end of the Second World War it was commandeered by the Soviets who have kept it in their vaults without realizing its historical significance.

Finally, the film examines the propaganda war that ensued after the bombing. Extraordinary colour archive reveals the propaganda war that was launched by the Franco forces to ‘prove’ that it was the retreating Reds that had destroyed the town. Despite the horrors of the bombing, the number of fatalities – less than 200 – was not nearly as high as originally mooted. But the importance of Guernica goes far beyond the number of deaths. For the most important victim of Guernica was the age of innocence – as the ensuing World War was soon to show.