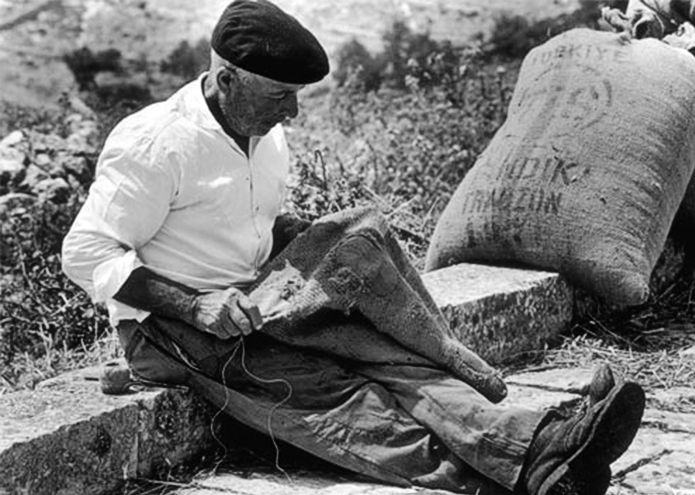 The memoires of a humble Sicilian worker TERRA MATTA was written at the end of the nineteen seventies by Vincenzo Rabito in an ‘invented’ Italian. Even though illiterate, Vincenzo had a great narrative talent which has given us an extraordinary story of the last century.

Born in 1899 Vincenzo crossed all of the main events of the century with its wars, its ideologies, the victories and the defeats, the enormous social and economical transformations. Always striving to survive he left the country and lived the dream of African colonization, he went to work in Germany under the allied bombs, he witnessed the arrival of the American troops in Sicily and finally in the sixties he managed to reach a relative welfare with his small family. His story is an individual story, one man against all odds, but also the story of many, all of those who never managed to express themselves in a whole life time.

Vincenzo Rabito never went to school and what he learnt he learnt by himself, stealing his smaller sister’s school book or trying to understand the newspaper leftovers. At a certain point of his life, he sat down in front of a portable Olivetti he had bought for his sons and he wrote thousands of pages without any full stops, commas or any clear sentences and paragraphs. What was written was a sort of Italian that derived from the Sicilian dialect and the phonetics he translated on the typing machine. But his way of telling his stories and his approach to history made of TERRA MATTA, when published, by one of the most important Italian publishers Einaudi, a literature case and a best seller. Vincenzo tells his ‘damned life’ with irony and sometimes bitterness but sincerely even when he himself was not at all inspired by strong ideals or morality.

The film will chronologically follow his life with a great attention to the faces of the people (young kids living in the country side today, elders talking in the Sicilian piazzas, young and older women in their every day life) and the locations where Vincenzo was born and grew up. His three sons will be re-united in Sicily and bring us their vision of the father’s story. Archive images will play a very big role in the film. They will be coming from various different sources and years, from the public image archives (such as the Military archives, the Istituto Luce archives, our national broadcaster RAI, the NARA in the United States, German archives of materials shot during the war, various museums and image collectors) and from the private, family heritage of the Sicilians. There will also be an artistic representation of those years which will be seen through some works of Renato Guttuso and Bruno Caruso and obviously the beautiful but harsh Sicilian landscape.

Carusi is a chapter dedicated to the extremely poor childhood and adolescents of Vincenzo around his native village. Soldiers will indulge in the stories of the first world war, one of the most relevant parts of the book. Vincenzo, born in (18)99 has to leave his surroundings and grow up suddenly. For the first time in life (but with many others like him) he learns how to ‘be Italian’, the alphabet and his capability of being violent and aggressive. The film will not hide the violence on women in the war zones, the spread of terrible sicknesses, death and the advancing of ideologies. In Adventures in Africa Vincenzo experiences work and racial differences in colonial Africa, in Germans and Americans he tells us about the voluntary work he did in the German factories to escape poverty but ended up under the American bombs, or the meeting of American soldiers, when he managed to return home, that spoke to him in his own dialect! The Bella Epoca is the after war period, the economical boom with the arrival of television and the schooling for his children, finally. Politics, generational conflicts, cultural, social and economical transformations are all seen through the eyes of a humble man what had only two aims in life: assure the survival of his family, assure an education for his three children.

Popular Sicilian music, which has become very popular again today, will accompany our travel creating a parallel journey from the local traditions to the modern interpretations of today. This will suggest and underline the link that Vincenzo had throughout his life with his roots, that are also our roots.

Italy / 2012 / 74′ / HD
Director: Costanza Quatriglio
Production: Cliomedia Officina in coproduction with Cinecittà Luce and in association with Stefilm
In collaboration with Regione Sicilia