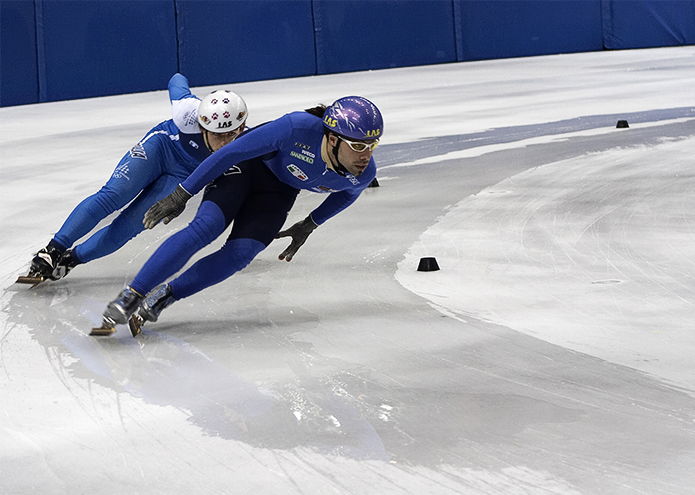 In time for the opening on February 10th 2006, several new sports facilities had to be built and tested at the Olympic venues.

Learn how the Giant Ski Jump, Bob Run and Ice Rinks were designed and constructed.

BUILDING THE WINTER GAMES – WDNESDAYS AT 9PM FROM 8TH FREBRUARY

This February the Italian city of Turin will be playing host to the 2006 Winter Olympics. Preparing for the games is a colossal undertaking: there are more than 30 venues to be built from scratch and the pressure to finish on time is tremendous. Even worse, Turin is a city with no alpine tradition and experts must be drafted in from across Europe. Basins of water, ski lifts, jumps, a bob sleigh track and three ice rinks are all being prepared by a task force of thousands and at a cost of millions.

Testing the Games follows chief engineer Vittorio Salusso and his team as they race against the clock to be ready for the start of the Winter Olympics. Technology, science and human performances are all being tested and pushed to the edge in time for the Games.

Learn how the structures were built in our Machines and Engineering Guide.

Turin is where the big ice sports events will take place: ice hockey, figure skating and speed skating. The special stadiums are close to each other and easily accessible from the Olympic Village.

The Oval Lingotto, next to the former FIAT Lingotto factory premises will host the speed skating events. It was designed by the London office of HOK Sports and Studio Zoppini of Milan.

The Lingotto Olympic District is located on the Mercati Generali, the exhibition area of Corso Massimo d’Azeglio. The Torino Esposzioni, a temporary facility, is also situated here, in the Giovanni Agnelli pavillion.

The Palasport Olimpico, designed by the Japanese architect Arata Isozaki was built in front of the old Stadio Communale Santa Rita, the former football stadium and will host the ice hockey events.

The most unusual building has to be the Palazzo a Vela. The refurbished Palavela is ideal for figure skating and short track speed skating events. With its hexagonal shape, surrounded by a 130m long ring, this building is a fascinating example of modern Italian architecture. It was built in 1961 to commemorate the 100th anniversary of the unification of Italy and had since been neglected for many years.

The architect Gae Aulenti has now taken out the gigantic windows and created two separated buildings under the sail-shaped roof. The artificial ice system is automatically controlled and athletes such as Fabio Carta, Italy’s medal hope in short track skating, have already tested the ice. After the Olympic Games the stadium will be used for various indoor sports events.

A bob run is an extremely complex construction. The one at Cesana Pariol is 1.5km (0.9 miles) long, and has three entrances, 19 curves (11 left and 8 right) and a height difference of 125 metres.

The maximum speed reached in bob races is about 130km (81 miles) per hour. The run contains a labyrinth of cooling pipes with a total length of about 87km (54 miles). The liquid is regulated via sensors under the thick layer of ice. It is a technological masterpiece guaranteeing a constant ice thickness of 5 to 10cm.

Vittorio Salusso and the German bob run expert Udo Gurgel, the Italian engineer Franco Pavan and the Italian bobsleigh manager Ivo Ferriani cooperated on the construction of the bob run. Roman ruins were discovered during the construction work. Fortunately, they were found not to be particularly valuable, so it was possible to continue with the project.

However, during the first trials on the run, several bobsleighers were catapulted out of the course and were badly injured. Work on the run was almost called off. This would have meant that the events would have to be held elsewhere. But it finally proved possible to make the bumpy course more even and to change one of the curves.

A completely new ski jumping facility with two jumps and three training jumps has been built in the village of Pragelato. The man responsible for all alpine construction work was Vittorio Salusso. The architects Giorgio Marè and Stefano Seita won the tender for the ski jump facility, and the head construction engineer was Wolfgang Happle.

The in-runs are made of steel and ceramics, the out-run area of concrete and a plastic cast. A cable crane, normally used for building dams, was required to position the enormous construction precisely. As the ski jumping facility was built on the grounds of a natural park, particular attention had to be paid to special environmental requirements.

Without flying aids, athletes can jump further than 100 metres from a ski jump. They thereby reach take-off speeds of more than 100 kilometres (62 miles) per hour. To ensure safe jumps from the ramp the so-called K-point has to be precisely calculated. The engineers were assisted here by one of the biggest names in ski jumping: Janne “Petteri” Ahonen. During his training programme at the Helsinki ski tunnel, he simulated the conditions for the construction of the jump.

Also built were the judges’ tower, the warm-up rooms for the athletes, the lift, the snowmaking system, a complex lighting system as many events will be floodlit, and the three-storey stand for 2,500 spectators.

The system was tested by the Austrian ski jumper Thomas Morgenstern, who is thought to have a good chance of winning a medal at the Games.

The building schedule for the Athens Olympics was widely criticised, but as we learn here, things have not run any more smoothly for Turin as the city hosts its first Winter Olympics. The fact that the city has no real winter sports tradition is merely the first obstacle: when naturally occurring asbestos is discovered on the bobsled site, the problems really begin to mount up.