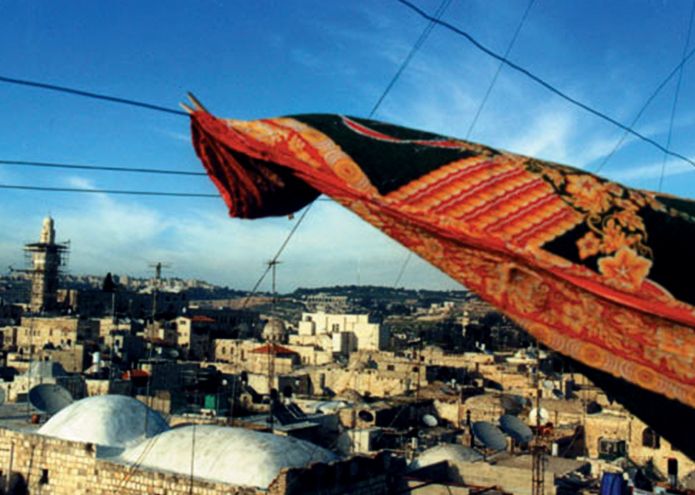 SONG ON A NARROW PATH

Akram is a Palestinian photographer living in Jerusalem. In the eighties he captures the grief and pain on the streets of the first Intifada uprising. The violence gets to such a point that he can no longer bear it. Through the portraits of three characters he shows the constraints and difficulties of a life under 30 years of military control. Reem, an artist who claims her right to expression; Ali, a black political prisoner obsessed by the occupation and Farouq, who lives on the glorious memories of the past, are Akram’s metaphors. For them Jerusalem is a dream that troubles the mind and spirit between the recurring violence and mere survival.

AKRAM SAFADI
This is a portrait of my city, as I see it, through the lives of those who are close to me.

When I finished my studies the first thing I did was to pick up a camera. Once again I was on the streets, but this time to take pictures. In 1987 the streets of Jerusalem were taken over by a new wave of protest against the Israeli occupation. I became part of the regular crowd of foreign press photographers. My job was to take pictures of the same familiar scenes I’d grown up with. I started to discover the power of the image over the written word. My photographs were published across the world and like many other pictures they show us mostly as victims. I realised that we as a people were coming to be identified by these same images. “

“Jerusalem is a feeling deep inside me. It goes back as far as I can remember. All my life I have been trying to somehow capture it. But it’s like trying to take a picture of an emotion: just when I think I’m there, it slips back out of frame. I dream that one day, my city will be just like any other city in the world.
Will it happen?…”

“The streets are filled with familiar sounds. Once again I catch the smell of death. New names appear on the list of dead. Many with bullets through the head, the face and the back. Anew Intifada is taking over the streets. The brief moment of calm is over, and normal life has resumed.”