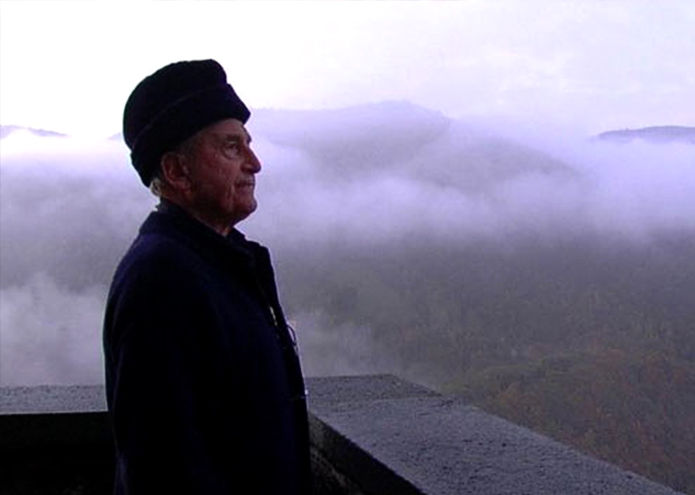 Every documentary is based in a different town or village, allowing us to explore the Piemonte region in an unconventional and unique way. From Aramengo to Serravalle d’Alba to Torino the stories are a key opening up the door of reality: with Amerigo, who collects stories thanks to oral witnesses and brings them all over the world, or Romano who makes grappa like no one else in Europe, or the Nicola family, art renovators for four generations (all still living together) and the king of sweetness, who makes the tiniest sweet drops in the world. And following their lives, with their hopes and dreams gives something to all of us: a drive to live and understand beauty and pleasure. Something we all can recognise and appreciate.

THE TRAIN ON THE HILL
When he got to the top of the hill of Superga in Torino, Jean Jacques Rousseau shouted: “In front of me I have the greatest sight which can be seen by human eye!” Everyday this breathtaking view appears to one of the attendants of the century old tram-rackway. Everyday, at dawn, one of the attendants must walk the whole way down to check that the rails are not cluttered by debris or small animals. Following him and the maintenance team brings us to live through a strong relation of love for one’s work.

TO THE ROOTS OF BAROLO
Teobaldo Cappellano has been growing grapes and making wine all his life. He’s now decided to raise and produce Barolo the way it was made in the 1800s. In doing so he risks having his crop ruined by phylloxera. Will his experiment prove to be viable for the market?

LEONILDA’S PHOTOGRAPHS
Umberto has been collecting Leonilda Prato’s photographs since he discovered their stunning beauty. Leonilda was the local photographer who earned her living by portraying the people of the village and the mountains around it. Her art was the only visual memory that could be passed over to the generations, so much so that she became the official photographer of the resistance. Her nephew Umberto has decided to find all her photographs and has asked the village of Pamparato to help him.

THE COMING OF AN ANGEL
Don Giuseppe has to complete the mission father Antonio left before dying: an enormous statue of St. Michael for the million year old Sacra of San Michele. The fact the winner of the art competition is an abstract, modern sculpture he doesn’t quite appreciate isn’t making things easier. Furthermore it must be placed on the spot by helicopter! A nightmarish operation which Don Giuseppe must oversee as well as the official opening with the bishop, the carabinieri and the local politicians.

THE POET OF GRAPPA
Romano Levi makes grappa according to a traditional method that he is the last in the world to use. His bottles may be found in some of the world’s best restaurants, and Chancellor Schroeder is one of his clients. But Romano does nothing to promote his activity even though his hand painted bottle-labels are authentic pieces of art: an item for collectors.

THE SMALL DINASTY
The Nicola family have been living and working together for many years in a small village called Aramengo. From Giuseppe, the 84 year old nonno, down to his 3 nephews in their twenties they all have the great skill of art renovating and are working on the most precious art pieces in Italy. The last arrival in the family is one year old: he too an art craftsman?

THE KING OF SWEETNESS
The Leone factory is as sweet and as beautiful as the bon-bons it makes: an art-noveaux building which one doesn’t forget easily. Giovanni Monero, the owner, was born in the factory he inherited from his grandfather and is now obliged to leave it. The pastiglie Leone are so famous and production has been rising so much that there is no alternative. But Mr. Manero has some interesting ideas on the new factory, where he’ll be bringing the passion of more than 150 years of sweet making.

MONFERRATO RIVER BLUES
In the 60’s, the river Po flowing down and across Casale Monferrato, hosted hundreds of families with their beach-chairs, umbrellas and barbecues. Many built shanty houses on the flood-lands where they would meet to eat, drink and play music. One of the musicians was also a cinematographer who put these moments on film. Today he meets some young rastafari’s who are re-discovering the houses and the meaningful idleness of the banks of the Po river.

MIACCIA MON AMOUR
Andrea is competing with the local Mcdonalds by launching a traditional food called Miaccia (a waffle with melted cheese) in his store. He also wants to export his formula to the rest of Italy and expand even beyond. But he needs his grandparent’s knowledge of the mountain traditions in order to propose some original side dishes. They help but don’t really approve.

ON THE ROADS OF OCCITANY
Two brothers have called their group Lou Seriol and are now hot on the national and international music scene with their interpretation of the “Langue d’oc” traditional music. At home, in the valley’s local bar where young “trobadours” often meet and feast with their favourite drink, they’re bringing this culture back to life!

AMERIGO’S VOICES
Amerigo is a 70 year old explorer who has been discovering traditional songs for many years now. He tours the region with his old recorder, taping the popular songs that the people once used to sing by heart. Amerigo also leads a chorus which has become very popular, specially after the tour in Palestine and Israel. But Amerigo hasn’t changed and his main concern is to give people back what he has been taking from them in years.

HEROES ON ICE
At 18, Ciaz was the local hero and ice hockey champion. Five years after he lost a leg in a car accident he is appointed to create the first Italian ice sledge-hockey team. The Italian para-olympics will start in Turin on the 9th of March 2006: an enormous challenge for Ciaz, the ‘new’ players and the olympic organizers. And Ciaz had just a year to get ready!