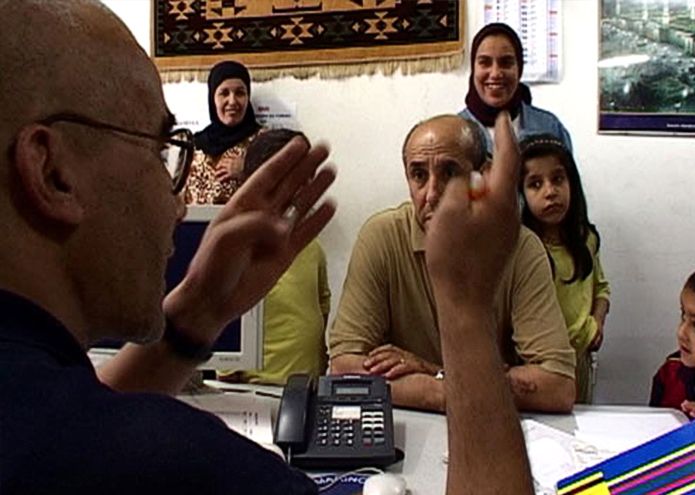 “Sergio Botto is mannered and professional Italian travel agent and Youssef El Idris a rough, authoritarian Moroccan immigrant who take care of a multicolored crowd of passengers and their huge luggage. As they tell us their stories we glance at their strange and respectful relationship: a simple yet necessary example of integration.”

Every morning in the small Italatlas office they face the usual crowd of immigrants. The “ethnic agency” as Botto calls it, offers all sorts of services to foreigners. But for many customers they are known for one reason only: they organize the Sun Coach, the official bus connecting Torino to Morocco.

THE CHARACTERS
At his desk Youssef is a little king: he arrived in Italy 15 years ago. A pioneer of immigration, he now controls the whole bus organization from bookings to departure and is a respected point of reference for all Arab customers living in the region. Sergio Botto stays in the background and observes the crowd behind his glasses. When he steps into action next to Youssef, surrounded by people he cannot understand, he seems like a fish out of water in his own agency. Yet it is not unusual for customers to come to him searching for help: from filling up a job application to an advice on buying an apartment. He counsels them with attention and pride.

During the years the duo has gained respect and trust from the whole foreign community. Of course Botto’s business would not work without Youssef, on the other hand Youssef’s powerful position in the community has a lot to do with Botto’s enterprise. As we observe their different ways of working together, dealing with customers and taking care of the agency, Botto and Youssef become an early example of improvised and necessary integration between cultures.

At their side we meet their clients and collect their stories. Who comes to the agency has overcome the problems of visas and occupation and can organize the trip back home. It is not just for vacation, for many it’s the demonstration of success after years abroad and the way to keep a connection with their culture and pass it on to their children growing in Italy.

As summer approaches, the Italian school ends: women with children go back home on the “Sun Coach” while their husbands stay behind to work. The travel agency gets filled with customers: framed by the door of the tiny office they form magnificent compositions: women with their Chador hold their breath waiting for Youssef’s response, children run back and forth between the desk and the water dispenser, while men stand silently in the background.

After days of booking, arguing and planning, it’s time for the bus to depart: Youssef and Botto move to the station where the Sun Coach waits. While Youssef weigh the luggage, Botto controls passports and hands out tickets. The men wave goodbye to their families as the coach departs. 36 hours of highways through Italy, France and Spain and then Morocco at last!

Back in their small office Youssef and Botto work side by side as usual, surrounded by their customers. As a coach arrives to Casablanca, a new one is ready to depart. Today’s needs keep Botto and Youssef together, but what will their relationship evolve into, once new generations grow?

MOTIVATION
The film was born from my desire to explore the slow, silent change happening in the city I live in.

When I was in high school, one day we started to see an old Moroccan man standing at the street light selling sponges and lighters. That was 12 years ago: nobody would have imagined that the city would have changed so much welcoming thousands of immigrants and reshaping itself with the new communities.

I initially thought of following the bus trip that connects Torino to Casablanca twice a week and collect the stories of the passengers.

During the research I spent quite a while in the small agency that organizes the bus trip: I was fascinated by that small chaotic world and by the two persons that run it. Sergio and Youssef, their relationship, their clients, all this is the change I was looking for: the small seed of an existing new world.

Inside the agency I saw quite clearly how we are adapting to a radical transformation of our social life.

STEFANO STROCCHI
Born in Turin in 1975 , he studied Fine Arts and Film Studies at Concordia University in Montreal, where he graduated in 2001. Since then, he works in Turin, Italy, with Stefilm where he cultivated his passion for documentaries and a great experience in international coproductions as production manager and producer. OVERBOOKED is his first documentary film as director/author.