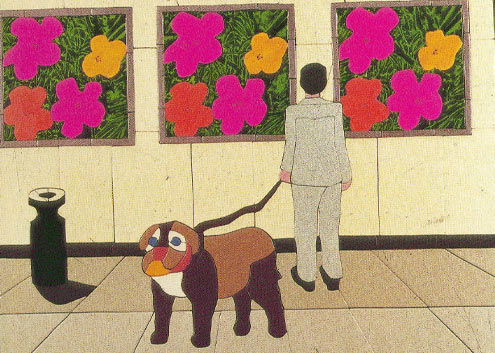 Ugo Nespolo, painter, sculptor, film-maker, ceramist and graphic advertising artist. Monoigraphic and retrospective exibitions on his work have been held by the Philadelphia Museum of Modern Art, the Polska filmoteka in Warsaw, the Wallraf Ridrastz Museum in Cologne and the Georges Pompidou Centre in Paris. He has created graphics for advertising, TV commercials and design objects for Campari (1990 World Cup), Azzurra and Swatch.

60 one-minute clips show his “multimedia” works reproposed by the director Marco di Castri (his work also having been shown at the Georges Pompidou Centre, in 1993). It is up to the spectator to put the pieces together and “give a meaning” to the whole. With an exasperated use of the television medium, Nespolo’s art “comes into our lives”.