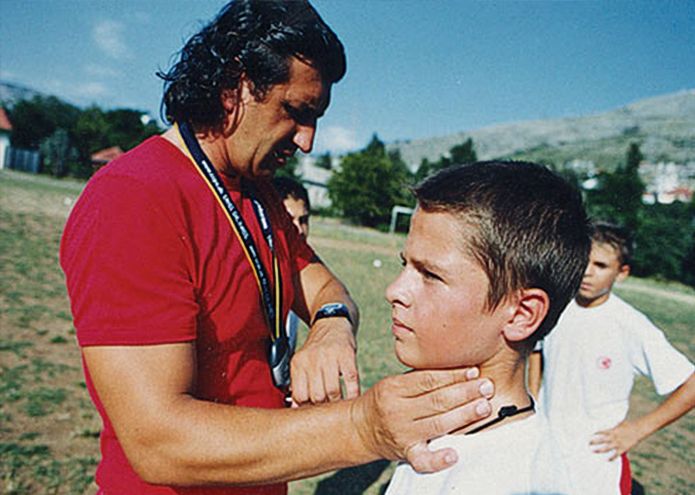 Mensud fought in the Bosnian war, defending Mostar and the
Old Bridge. Now that peace has returned and the Bridge has been
rebuilt, Mensud is fighting against the new nationalist mentality.

Torn apart and enraged by ethnical conflict, Mostar is more like two ghettos divided by a big boulevard, than the joyful Montmartre of the Balkans that it was before the war. From the pitch of the Velez football school, the legendary team of Mostar, Mensud teaches an army of kids the value of friendship and unity, but his son, Dzenan, one of his players, cannot stand this struggle any longer.

I wanted to make a film about the Mostar that I had never known, which my best friend, a girl from Mostar, remembered as a joyous and multicultural city before war and nationalism tore it in two and destroyed it. I searched for what might have survived, assuming something had, of that past when Mostar was a city which belonged to everyone. It was here that I found the Velez Football Club. Before ’92, the year when the conflict broke out, the entire city would go to the stadium to shout “Mostar’s in my heart, Velez until I die”. With the war everything changed. Velez is no longer the pride of everyone but represents just one side of the city and, during the derby between the two Mostar teams, the atmosphere is that of a state of emergency with a thousand policemen, international peace forces and security guards present.

At Velez’s headquarters, battered by grenades and bullets from machine guns, a handful of men have not stopped believing in unity and on the pitch of their football school, all nationalities are welcome.

As soon as I met Mensud, the coach of a small team of young kids and director of the school, I had no doubt that it was he who should be my protagonist. It was through the relationship between Mensud, his son and the city, that I tried to tell the story of the struggle to beat nationalism and to bring back to life the city that belonged to everyone. I wanted to tell the story of the old Mostar, but maybe, through Mostar, I have told the story of many other places, among which my own country, where people who are different are mainly not attracted by each other but reject each other and make our civilisation smaller and nastier. It just takes one man with a little courage to pass on to another man a little courage and so on, and everything can change, one day.