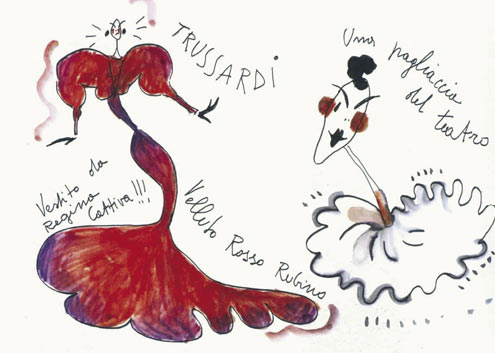 Milano and Italian fashion seen through the eyes of MAD

Italian fashion. Practically synonymous with creativity and style. Armani, Ferrè, Fiorucci, Missoni, Gucci, Versace, Prada and the rest all come from the same place and flourished in a few decades. Before that Milano was just a town of textile industries and needle-workers.

All starts at the end of the sixties. Italian tailors take advantage of the 1968 youth protest movements, and give form and shape to women’s dreams. Fashion goes from Haute Couture to Prêt-à-Porter, hand in hand with the women’s fight for equal rights. The revolution in fashion rapidly evolves following social trends which see women getting into power roles (and dresses) and young and talented tailors becoming famous.

Then branding explodes and Milano becomes the world’s fashion centre.

Maddalena Sisto, MAD for the readers of Vogue, Elle Germany, The New Yorker and the Corriere della Sera, witnessed it all and put it into extraordinary drawings and sketches. She recorded every trend suggested by the Milan stylists and chronicled how fashion developed and influenced the life of Italian women. To such an extent that her ‘signorine’ represent the desires, fears and imagination of women today.

She left us over 12.000 drawings together with her personal diaries and the video’s of her work in the fashion field. Everything neatly and persistently collected by her husband.

A WORLD OF FASHION tells the story of Italian fashion through MAD’s drawings, specifically animated for the film, and through the fashion designers that loved her work and the way she was able to predict where their own work was heading to.
Welcome to the liberated, sensual and glamorous world of MAD!