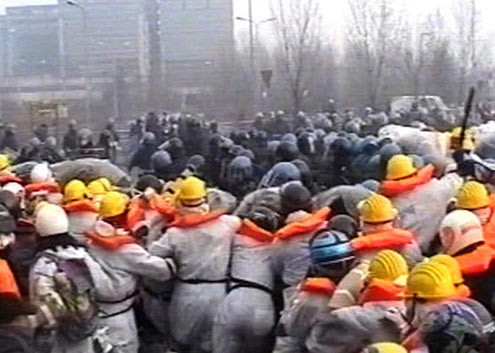 ALL IN WHITE: An army of dreamer

Part of 4 docs of an Arte theme evening (all available) titled NEW MILITANTS.

The Tute Bianche (white suits) are the rebel sons and daughters of globalization, an army of dreamers armed only with plastic and words, taking on the powerful “Empire”. The film is developed via the memories, analysis and reflections of Beppe Caccia, former squatter and one of the founders of the Tute Bianche movement, who today serves as councilman in charge of social policy for the City of Venice. His is an insider’s voice, clear as a bell and backed up by first-hand experience, that reviews the progress and milestones of anti-globalization up until the G8 protests in Genoa, where the Tute Bianche took off their white suits for good and adopted the appellative i disobbedienti.

It is a journey through places, direct actions, music, debates and poetry, in which we discover not only the past, but also what lies on the post-Genoa horizon, and the meaning of the slogan “another world is possible.”