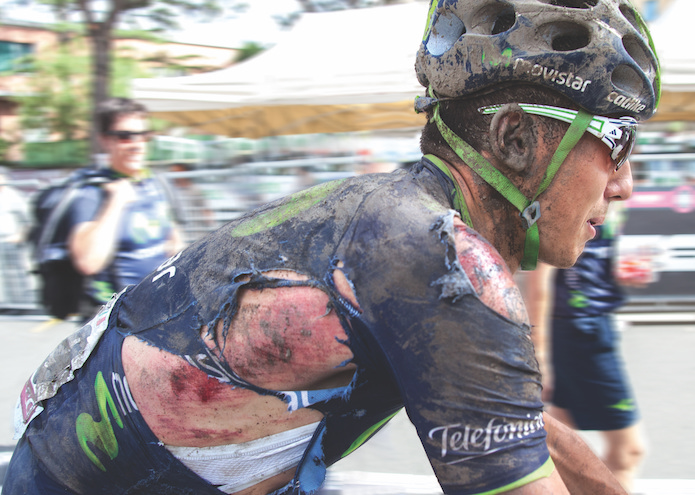 For most of us, the cyclists at the back of the race are simply the losers. They are called water carriers, domestics, gregarios, and the Sancho Panzas of professional cycling. Moreover, they rarely experience personal victories – these sportsmen sacrifice their careers to help their teammates. We follow the magnificent world of the cycle race from the point of view of the doctors’ team situated in a claustrophobically small medical car surrounded by wounded cyclists. The life of the medical team in the race reminds one of the front line of war. Cyclists crash, they rise and they race again, and amongst this chaos, many magnificent things happen. This film-odyssey reveals the untold world of the wonderful losers, the true warriors, the knights and monks of professional cycling.

For me, cycling is more than a sport or a film subject. I’ts a very important part of my life. I’ve dream about being a cyclist, I’ve work hard till a serious accident. Then I’ve choose for Math’s studies, and then I became a director, but I never lost my love for cycling. Some how, this movie is the chance to realize a dream: to overcome the biggest pain climbing the hardest mountains of Giro. Cycling is not just a sport. Cyclist are real gladiators. This sport is a life’s metaphor, where talent, sacrifice, commitment is not at the service of self success but at the service of the all team. The essence of the athletic effort is not finalized for a leadership, but has the purpose to sacrifice for a team mate. To compete in this sport it’s necessary to possess a titanic willpower not only to achieve the best athletic results but also to keep one’s mind and life style immune from individualism, pride and selfishness. Professional cycling thus enables me to observe human values, virtues and passions through the magnifying glass that this difficult sporting activity makes available to me. The cycling race can also be understood as an allegory of our society, where there are leaders and gregarious and each assumes the role that competes according to their abilities and merits.
Arunas Matelis