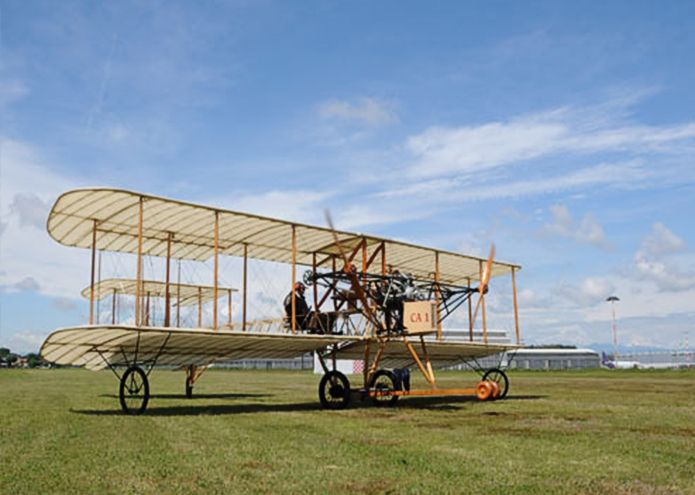 One hundred years ago, at the Cascina Malpensa near Milano, a strange ‘machine’ leaves the ground. The take off is smooth but after 250 meters the machine dives down and smashes to bits. The flight is brief but it triggers the birth of the first Italian airplane industry established by Gianni Caproni. A few years later he designed the first bomber in history and at the end of WWI he will employ 45000 people in his factories.
Today Mario Marangoni and Giancarlo Zanardo take up the same challenge. On the basis of the original Caproni drawings of 1908 and 1909 they want to bring that tentative to life, facing the same difficulties, doubts and fears.
With a cross cutting approach, the film will tell both the intrepid start of the European aviation industry as well as the real making of the CA1. The difficulties our heroes are facing today will allow us to live through the most exciting moments of last century’s greatest challenge: to fly!

INTENTIONS
Marangoni and Zanardo want to demonstrate that this airplane, with its technical features and particular engine, can fly. Piloting the enormous machine themselves they are putting their lives at stake to show how the birth of an industry such us the Italian was not based on luck or a gamble, rather a scientific intuition with a vision.
Following the reconstruction of the Ca1, with the necessary security modifications, we will live the atmosphere of those times, with the courage of the pioneers who risked their lives to be able to dominate nature. The most important and tense moments of the reconstruction will allow us to return to Gianni Caproni’s story and his initial battle. Together with the personal archive of the Caproni family, the archive material in the hands of the Istituto Luce and the Aeronautica Militare we will discover the little known story of the greatest pioneer of Italy and Europe’s aviation!