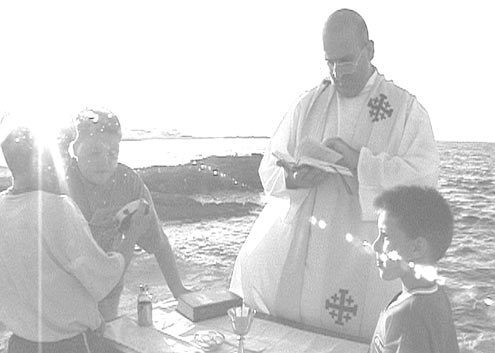 Located along the coast of Puglia opposite Albania, the Regina Pacis refugee center of San Foca is for many refugees and would-be immigrants the first point of contact in Western Europe. At times the center is teeming with as many as 400 – 500 persons, more than double the structure’s maximum capacity of 200. They are accompanied to the center by the police, and it is there that they wait to find out whether they will be accepted – in which case they are given a stay permit – or rejected and sent back to their home country. Men, women and children live in a state of limbo, there future uncertain. The Italian government has mostly preferred a hands-off strategy when it comes to caring for these people while they wait.

The center is directed by Don Cesare Lodeserto, a plucky priest whose domineering character is tempered by a penchant for irony and a strong sense of humanity. Don Cesare is a complex figure. We observe him in his daily activity as director of the center, as a priest, as a man. Through him we get to know the film’s other protagonists and their stories. First, there’s Renata from Ukraina, the Don’s trusty assistant. She’s 21 and hasn’t seen her son Eugene in a year and a half. Florian is Albanian,14 years old. He’s friends with all the “runners” that haul human cargo to the shores of Italy from the port of Valona in Albania. With their help he left his home country to come to Italy and look for his father. Marco is only 10 and came to Italy by himself, fleeing a life of poverty. As they evolve, their stories intertwine with those of other immigrants in similar conditions. We’ll find out whether Renata, with Don Cesare’s help, will ever be reunited with her son Eugene, and whether Florian is able to get in touch with his father. In the Regina Pacis Centre people come, people go, all testimony to the upheaval of what could very well be called the post-modern diaspora.