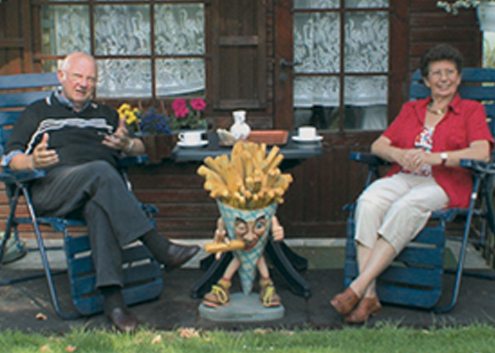 ONCE UPON A FRENCH FRY

It’s a story as basic as the salt of the earth. An international adventure including diplomatic quarrels, scientific discoveries and indus-trial R&D. The Belgians are famous for eating them, and the British call them chips, but for the Americans, they will always be French fries.

The “sacrosanct” French fry’s preparation is a “ritual to be followed religiou-sly”, according to the founder of a famous multi-national fast-food chain.

But French fries haven’t always been worshipped. When potatoes first arrived in the Western World, they were nearly excommunicated. And today, science suspects the deep fryer of covering up a public-health scandal.

Whichever way you turn, French fries are being threatened by attempts at standardization. In the USA, potatoes grown for French-fry factories are subjected to constant testing and readjustment. At McDonald’s, the taste of fries has been bottled by IFF, the industrial giant that designs Calvin Klein fragrances. The economic stakes are unbelievably high, the market colossal, the competition fierce…

How did fries reach these stratospheric heights? Follow the money… This film shows us the economic, historical and cultural forces behind this ir-resistible ascension. It will follow fries’ trail to the four corners of the globe, revealing the netherworld of a phenomenal agricultural industry. Testimony from buyers, sellers, industrials, scientists, nutritionists, French-fry specialists and French fry-ologists will be interwoven with archive footage, fiction and news stories, drawings, photos, and popular songs; and the entire French fry process – from farm to fast food – is filmed. Everything you always wanted to know about French fries, but were afraid to ask.