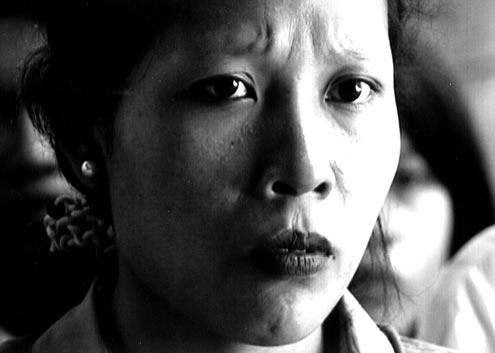 Through this documentary we wish to present the portraits of women working for the same multinational company to manufacture the same product, an item of clothing, in different countries and in different continents.

These portraits of women from different cultures who, on the surface, have nothing in common, will be interwoven by means of a single thread, taken from a piece of clothing that we can find in our shop-windows, symbolising a system which advocates free trade and the free movement of money and goods as a universal value.

We would thus like to approach concretely, and from an unusual angle, a mechanism – an economy on the global scale. Though this mechanism is presented to us as ineluctable, we know little about its players and even less about those who, from day to day, are its first victims: women workers in factories scattered around the world for optimum productivity.

We are thinking of choosing four or five women of whom at least one will work in a Western country.

What are the living and working conditions of each woman? Do they have other things in common apart from this artificial link? Do they know each other? Are they actually curious to get to know each other ?

We would like to bear in mind while making this film that every woman who weaves a piece of clothing is also weaving her dreams. At least that’s what was believed in earlier times; and if this belief belonged to numerous traditions, is there anything left of it today? Or do we all share the same fetish for goods?